The Laboratory of Geodesy and Geomatics Engineering (GeoMatLab) at the Technical University of Crete in Greece is located in Crete, one of the EU’s convergence regions, but is a dynamic and developing scientific entity on a European and international scale. Its research activities are on the Global Navigation Satellite Systems, satellite geodesy and deformation monitoring, and on satellite altimetry calibration and validation (Cal/Val).

On the Gavdos island, 40 km south of Crete, the GeoMatLab has established in 2001 and has been operating continuously, as of 2004, a permanent calibration facility for satellite radar altimeters. Four permanent sites exist in the world for providing such absolute calibration of satellite altimeters. Also, GeoMatLab operates a network of continuously functioning GPS reference stations in the western Crete and Gavdos, one of the most active seismic zones in Europe.

Because of its geographical location, GeoMatLab was not able to attract top researchers to boost its scientific excellence and drive it to multi disciplinary research. The infrastructure installed so far needed to be upgraded to keep up with the continuous technological advancement and challenges in altimetry and deformation monitoring. The objectives of this “SOFIA” project were directed into:

Within the SOFIA Project, modernization and up-scaling of the infrastructure for satellite altimetry calibration and tectonic deformation monitoring have been completed in Gavdos and Crete, Greece. New equipment have been procured and installed at several field sites as well at the central facility in the Laboratory. Recruitment of post-doc researchers resulted in software development to estimate altimeter bias using in-situ and satellite altimeter observations. The applied calibration methodology has been the result of the cooperation with the OCA (France) partnering organization as well as with the other satellite calibrating institute in the USA, i.e., the Jet Propulsion Lab.

In collaboration with the Austrian SRISG partnering organization and ESA as well with CNES (France), a new prototype microwave transponder for calibrating satellite altimeters has been developed and delivered in 2011. Calibration procedures using the transponder are now developed as a result of the collaboration between SRISG and CNES, as well as ESA. Plans are under way for the calibration of the ESA satellites, Cryosat-2 and the upcoming Sentinel-3, as well as the Chinese satellite HY-2 and the French/Indian mission of SARAL/AltiKa using Gavdos and Crete Cal/Val facilities.

As a result of the cooperation with the German partnering organizations (GFZ and DGFI), data from the established GPS sites in Crete and Gavdos are routinely processed using three independent software packages, i.e., GAMIT, GIPSY, and Bernese, for monitoring crustal movements and parameters for the troposphere and ionosphere, but also for determining parameters in the satellite altimeter calibration. Permanent sites for the European EGNOS and the Chinese navigation system of BeiDou/Compass have been established in Crete and enabled GeoMatLab to extend its operations into other international navigation satellite systems. Collaboration with the SOFIA partnering organizations enabled us to improve the satellite altimetry calibration methodology, as well as the GNSS data processing techniques and efficiency for crustal deformation monitoring.

Work performed and the main results

The results accomplished, since the beginning of the SOFIA Project, can be grouped into (a) infrastructure modernisation and up-scaling, (b) research capacity enhancement, and (c) promotional and dissemination activities.

Three of the permanent Global Navigation Satellite System sites established in west Crete within this Project.

Modernisation and up-scaling of the infrastructure for satellite altimetry calibration and tectonic deformation monitoring have been carefully planned, scheduled and completed in Gavdos and Crete, Greece. New equipment have been procured and installed at several field sites as well at the central facility in the Laboratory. Faulty and malfunctioning sensors and instruments have been replaced and are now properly operating. Eleven permanent GNSS sites in West Crete and Gavdos are now operational. A European Geostationary Navigation Overlay System (EGNOS) receiver and the first GNSS Chinese BeiDou receiver have been successfully installed inside the TUC University Campus in 2011 and 2012, respectively. 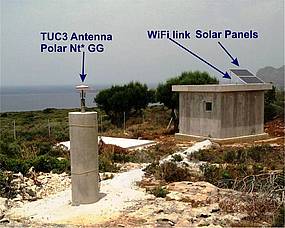 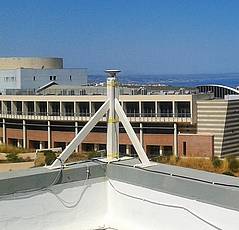 The European Geostationary Navigation Overlay System (EGNOS) site as established within the Technical University of Crete, Greece in 2011 and the BeiDou Chinese site setup in 2012.

Specifications and technical details for developing a new, prototype microwave transponder instrument for calibrating satellite altimeters, have been written up, in collaboration with the SRISG partnering organisation and the European Space Agency as well with CNES (France). This prototype instrument was manufactured and delivered in 2011. During March-June 2012, the instrument was calibrated and tested at the ESA Compact Payload Test Range facilities in the Netherlands. The transponder is now ready in Crete for satellite calibration. This development has tremendously enhanced the research capacity of GeoMatLab.The SOFIA Project has been declared as a “success story” by the European Commission.

The prototype microwave built in this Project at the Compact Payload Test Range facilities in the European Space Agency, Noordwijk, the Netherlands in 2012.

After the completion of this Project, the methodology and facilities at the Gavdos and Crete for the calibration of satellite altimeters have improved and were made capable to be extended for other international altimetric satellites using alternative and independent techniques, but also newly developed instruments. Collaboration with all partnering organizations that took place during this SOFIA Project have resulted in long-term associations by signing 3 Memorandum of Understandings with the Austrian, German and French Partnering Institutes.